Since 2013 YMCA Romania federation has a great partnership with Y Global from Oslo Norway in developing EVS projects.
We have there 2 Romanian young girls, Luana Popoiu started her service in February 2016 and Amalia Pop, with service started in August 2016.
Here you can find their thoughts about Norway, the activities they run , about the host organization: 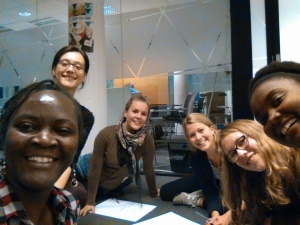 1. Sending organization: YMCA Romania
Hosting organization: KFUK-KFUM Global (Y Global)
EVS service: 16.02.2016-16.02.2017
Project title:Empowerment and Communication for Policy Change
Position: Volunteer in the Exchange department
“I have arrived at Y Global in Oslo on February 16th 2016 and have been since a volunteer in their Exchange department, working under the supervision of the Exchange Team Leader. In this position, I am in charge of assisting in the running of the exchange programmes of Y Global, carried mainly in partnership with other YMCAs and YWCAs from East Africa. My tasks are helping the participants with their visa processes, booking flights, liaising with insurance companies, travel agencies, following up on the participants and many others. I am also attending partner meetings along the Exchange Team Leader. I have also been involved in the recruitment process of our participants, being in charge with receiving applications, screening them and sitting in the interviews.
In May and June, I have been traveling through Norway along with 15 young people from 4 countries (Norway, Madagascar, Tanzania and Kenya), acting as their logistics leader. Besides me, the group also had another leader, in charge with dealing with group dynamics. It was a very challenging period, where I had to constantly learn things about myself and others and try to focus on the important things. It was also a position full of responsibilities, but I had Global’s full support, morally and professionally, along the way.
Culturally, it was a great experience that showed me how Norwegians live and their traditions. It was also the first time I came in contact with African culture, which was also nice and challenging at the same time. I learned African dance moves and listened to a lot of African music.
In the tour, we also visited Norwegian families, spent time with Norwegian scouts in a town halfway up north, tried kayaking, fished, hiked and slept outside.
Regarding settling in the community, the first 3 months, before leaving on the tour through Norway, were the loneliest of my life. I was living alone and staying in every weekend, as I had no one to go out even for a coffee with. It felt like no one wanted to get to know me and there were no people to meet. It was difficult to cope with, no matter how prepared I thought I was for this before leaving for Norway. The only positive things were Jenny’s invitations to meet her family or spend Easter with her and her family, which are very nice memories.
After coming back to Oslo from the tour, maybe because it was a nice warm summer or because I had been through a challenging period, I think I decided to take more responsibility for my friendless situation and I started to go out more, going to expats meeting and so on. Now I can say I have an almost steady group of people that I see regularly. In the beginning of August I have also gotten a flatmate and we get along well, which makes my life easier”. – Luana Popoiu – EVS Volunteer 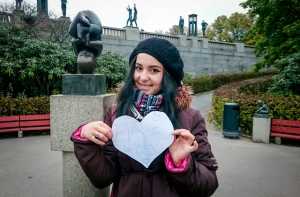 2.Sending organization: YMCA Romania
Hosting organization: KFUK-KFUM Global (Y Global)
EVS service: 2 August 2016 – 18 May 2017
Project title:Empowerment and Communication for Policy Change
“Hi there! Today I will tell about how I came to the decision of moving to Norway and being an EVS-er.The reason is simple: one of my biggest passions is volunteering. I like knowing that I can live not only for myself, but help others as well. Also, I like to believe that I can do something to change the society I live in, explore my creativity to make it a better place.

It all started when I was barely 16, and I started volunteering at this organization called Somaschi. The volunteers there help homeless people by giving them a home, a place to eat -generally, they try to make their life better. And I was part of that. I was working with Rom children, trying to integrate them socially. It wasn’t always easy, as people don’t change easily. The kids I worked with were born and raised in such a harsh and different environment from the one most of us had, and changing their view of the world, their behavior was a challenging task. The idea though was to NOT give up!Once I was a volunteer for like a year in Somaschi, I decided I can do more than that. So I joined another volunteering organization in my hometown: YMCA Baia Mare. That decision definitely changed the course of my life. Not only did I make incredible friends and have awesome memories, but I got to grow as a person. And now YMCA Romania sent me to Norway. As in, how awesome is that?I wanted to be an EVS-er ever since I found out about the project. I just had to wait. I had to finish my studies (and when I say had to what I mean is that my parents really wanted me to get a Bachelor’s degree – not that it would actually be useful in finding a job). In Romania the degree is really not that useful, so that’s why I came to Norway, to work in a “perfect system” (perfect, they said… )
Being a volunteer here is not about helping Norway instead of Romania. My work here at KFUK-KFUM (http://kfuk-kfum-global.no/)transcends the notion of nationality, I feel like I’m a volunteer at an international level. We just want to bring peace and stop poverty.Besides working at KFUK-KFUM which takes me 2 days a week, I’m also working at Forandrignshuset (in translation, “Changing House”). It’s a beautiful place for volunteers to spend time with one another and involve in different activities, such as: making projects, singing, dancing or playing games. For all these we have a professional studio, lots of instruments and a stage. That’s why I just love spending time there!As an EVS-er I don’t get a salary, but I do get a financial support for my expenses (accommodation, transport, language courses etcetera). When you enroll on a program, the amount of money will be relative to the region you chose and how expensive living there is. The thing is, it really isn’t about money, it’s about experiencing new things and gaining knowledge.
So… How do I feel as a volunteer in Norway? Well…. Alone, mostly alone. And there are the chocolate and alcohol issues (which exceed a bit my budget). I could do just fine without alcohol…. Living without chocolate… now that’s something completely different!
What about the people here? They’re very distant, polite but unreachable. I guess that’s just their culture, the way they’re taught to behave…. Yet for a foreigner they might just seem to respect their personal space just a bit too much… Sit next to someone on the bus? Not exactly the best idea, cause you wouldn’t want to be impolite, would you?
If you bored with me so far, I have something for you: 10 fun facts about Norwegians:
-There’s no bad weather in Norway, you have the wrong clothes.
– They are eating fish, soup fish, cake fish and fish again.
– Sorry, they are eating fish everyday…. except for Friday night! They stole (adopted-they said) the Mexican taco. So, Friday night=Norwegian taco.
– If you are a Norwegian teenager you have to drink enough on Saturday for the whole week.
– For Norwegian families Sunday equals mountain trip day.
– If it’s summer and you see someone dressed like an Eskimo that person is not Norwegian.
– Even if the wind is cracking your bones and the water has 5 degrees C, if you are Norwegian that’s just the perfect day for swimming.
– They prefer driving on ice to ice-skating.
– “Nugatti is better than Nutella.”
– ” Norwegian chocolate is better than the Belgium one.” – Amalia Pop – EVS Volunteer 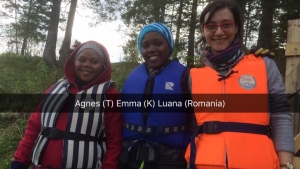 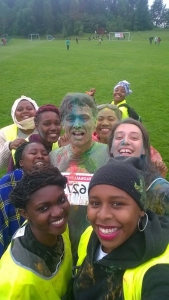